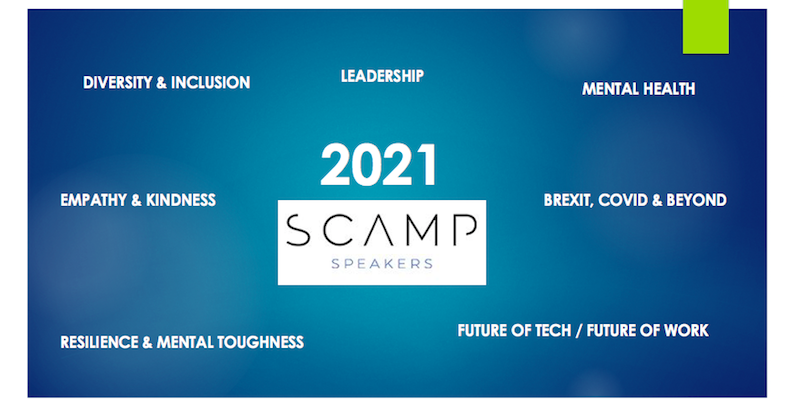 Well, when we think back to this time last year when we all started to make predictions about what the year ahead may bring, I don’t think anyone could have predicted quite what has happened.

As we move into 2021 and news of vaccines bringing some hope that live events may start to return in late spring, we wanted to share with you some of the most popular speaker topics we have received requests for in the past year. All of these we think will continue to prove popular in 2021 and in each case we have suggested a few speakers that can speak on the topic.

Winston Clements – is a culture specialist with an emphasis on Resilience and Diversity & Inclusion. His ultimate mission is to help 1 BILLION people to unleash their full human potential. Winston was predicted to live a life of isolation and pain due to a rare bone disorder known as Osteogenesis Imperfecta (OI). This condition caused his bones to be extremely fragile, suffering over 200 fractures in his lifetime.

Matt Ellison – is an inspiring and thought-provoking transgender speaker. His life experience as a trans man himself means those who hear Matt speak are inspired and encouraged. The principles of facing something so profoundly difficult and making such a huge and fundamental change apply to everyone in all areas of their professional and personal life.

Anj Handa – is the Founder of Inspiring Women Changemakers, a dynamic movement of changemakers who speak up for women’s rights. Named as one of Grant Thornton’s 100 Faces of a Vibrant Economy in 2018, described by i-news as ‘a a bloody brilliant woman’ and winner of the AFSA 2017 Positive Action Award, Anj has 20 years’ experience in the field of Social Impact and Inclusion. She was recently recognised in Forbes as one of the 10 Diversity & Inclusion Trailblazers You Need to Get Familiar With.

Some other good speakers on Diversity and Inclusion include – Amar Latif, Gareth Thomas, Anne Wafula Strike, and Asari Hill

Clarke Carlisle – is a former professional football and television presenter who is a keynote speaker on mental health, having suffered from complex depressive disorder throughout his career. Clarke Carlisle played football for QPR, Burnley, Blackpool, and Watford to name a few, and won promotions with two clubs and player at Wembley Stadium. After over 500 appearances he retired at the end of the 2013 season

Katie Piper – is a best-selling international author, inspirational speaker, TV presenter, and charity campaigner. Katie decided to share her story in a remarkable film for the Cutting Edge strand on Channel 4 called ‘Katie: My Beautiful Face’ which was watched by over 3.5million viewers and nominated for Best Single Documentary at the BAFTA Television Awards in 2010.

Other similar speakers to bear in mind could include Katie Maycock, Owen O’Kane, Simon Weston and Ruby Wax

Shola Kaye – is a communication specialist, award-winning speaker, and author, and speaker on empathy in the workplace. Shola spent the first part of her career in IT consultancy in the U.S.A., consulting at household name investment banks, and in the U.K for global clients in aviation and finance. Her struggles to communicate and gain visibility in the workplace -as a black woman and an introvert – led her to develop an interest in learning to create inclusive workplaces with open, supportive communication.

Paul Hargreaves – is the Founder and Chief Executive of Cotswold Fayre Ltd and a keynote speaker on leadership and compassion in business.Cotswold Fayre is a specialty & fine food wholesaler supplying nearly 2,000 retail outlets throughout the UK.The business grew from the cellar of Paul’s house to become the leading wholesaler to UK farm shops and delicatessens. The company’s ethos of working in partnership with its suppliers makes it the most sought-after wholesaler for the many new brands launching in the sector.

FUTURE OF TECH/FUTURE OF WORK

James Poulter – is the former Head of Lego Group’s Emerging Platform team and a leading thought leader and keynote speaker on the future of work, voice technology, conversational artificial intelligence, and social media. James is the founder of Vixen Labs – which is a company that specialises in Voice User Experience (VUX) which includes design and strategy – helping companies to embody their brand and give their customers greater experiences.

Nick Jankel – With a Triple First Class, science and philosophy degree from Cambridge University—and over 20 years of hard-won experience advising exponential unicorns and ambitious blue-chips on the frontlines of disruption—Nick Jankel is a highly sought-after professional speaker whose life’s work is to ensure people have the tools they need to adapt to relentless change and the mindsets they need to successfully transform their organisations and themselves.

Other good speakers on the Future of Tech/Cybersecurity are David Rowan, Alison Vincent, and Gary Hibberd

Anthony Bennett – is an inspirational speaker and motivational speaker & fundraiser who learned how to walk, talk and speak again after contracting three virus infections at the same time. After what many would consider being a miracle, Anthony was given only a 10%chance or survival, but has made a full recovery and is inspiring businesses, schools, and organisations with his optimism and bubbly personality.

Phil Olley is a sought-after inspirational speaker and author of The Nexus Code, who works with companies and individuals throughout the world to help them dramatically enhance performance, improve results, and achieve their goals. Topics include

The 7 Steps to Resilience in 2021.
The 5 essential steps to creating a breakthrough in turbulent times.
The 4 Cornerstones of Self-Leadership in adversity.
Leading Out of Lockdown – essential leadership tools for 2021.

Paul Nanson – served 34 years with the British Army during which time he held a number of leadership roles in a variety of capacities and in nearly every continent. He has led operations in Northern Ireland, the Gulf War, Bosnia, Iraq, and Afghanistan. His extensive expertise is based on operations, leadership development, recruiting, training and personnel, and is a keynote speaker on leadership and high performance

Cris Beswick – is a global thought leader and strategic advisor on innovation and the bestselling author of ‘Building a Culture of Innovation’. Originally trained as an industrial designer, Cris Beswick spent over a decade as a successful entrepreneur building an award-winning strategy & design group. He is now recognised globally as a thought leader on innovation strategy, leadership, and culture.

David Smith – is the Economics Editor of The Sunday Times and is a regular speaker at conferences and business events on the UK economy and Brexit.

David has worked for the Sunday Times since 1989 having started his career as an Economic Report Writer for Lloyds Bank, before moving to the Henley Centre in a forecasting role. 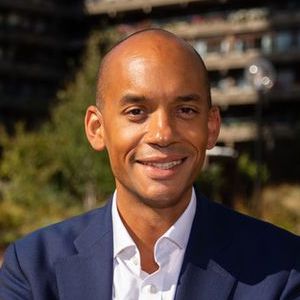 Chuka Ummuna – is a sought-after keynote speaker and strategic corporate advisor to companies on business-critical issues that impact on long-term value, reputation, and narrative – environmental, social, and governance (“ESG”) factors in particular. Widely recognised as the former Member of Parliament for Streatham (2010-2019), Chuka served in Opposition as the Shadow Secretary of State for Business, Innovation and Skills and Shadow Minister for Small Business for several years.

Others similar speakers would include Paul Johnson, Tom Swarbrick, and Vicky Pryce.

These are just a few ideas if you planning for next year. If you need any more information or have any queries please do get in touch on enquiries@scampspeakers.co.uk or call us on 020 8854 7247