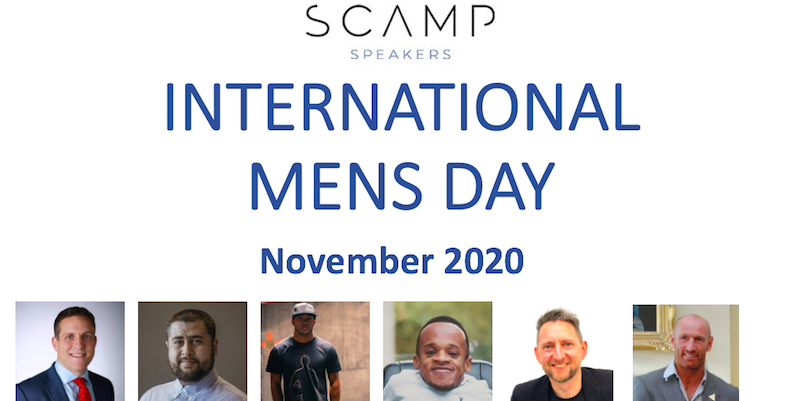 (1)       To promote positive male role models; not just movie stars and sportsmen but every day, working-class men who are living decent, honest lives.

(2)       To celebrate men’s positive contributions; to society, community, family, marriage, child care, and to the environment

(3)       To focus on men’s health and wellbeing; social, emotional, physical, and spiritual.

(4)       To highlight discrimination against males; in areas of social services, social attitudes and expectations, and law

(6)       To create a safer, better world; where people can be safe and grow to reach their full potential.

Dr. Ed Coats is a doctor working in obstetrics and acute care but is an extreme sports explorer and motivational and inspirational speaker. No stranger to taking on challenges having represented Great Britain as a track and field decathlete and led two teams to swim the English Channel for charity; it was in 2009 when he joined James Cracknell and Ben Fogle in the South Pole Race. Ed recently featured in the Channel 4 NHS Heros: Fighting to Save our Lives Programme.

Richard McCann is an inspirational, powerful, and moving motivational speaker, and founder of the ICan Academy designed to help ignite people’s mindsets and allow them to grow, develop and become more successful. Born into poverty on a tough council estate in Leeds, England, he was placed on the “At-risk” register before he could walk and talk. Then, just one week before his sixth birthday, his mother was tragically taken from him when she became the first victim of a man who would go on to become one of Britain’s most notorious serial killers, Peter Sutcliffe.

A former Welsh Rugby player, Gareth Thomas has become one of the most iconic figures in rugby, when he revealed he was gay – making him at the time the only openly gay high profile sportsman in the UK. His started by playing for a small youth club in Bridgend and went on to become Wales’ third most-capped player, the twelfth highest try scorer in the world, and one of very few to notch up four tries in a single match

Clarke presented two acclaimed documentaries for the BBC Football’s Suicide Secret and “Is Football Racist?” for the BBC and wrote a book about his career A Footballer’s Life.

Dan Keeley is one of the UK’s leading mental health activists, thought leaders, and keynote speakers on a mission to empower the UK to speak up when they are suffering. In 2017, after a 5 year battle with bipolar disorder and coming close to taking his own life, Dan ran 1250 miles from the Colosseum in Rome back to the London Eye to share his story on a national scale – raising over £15,000 for The Campaign Against Living Miserably and inspiring hundreds of others to speak up about their battles.

Owen O’Kane is a psychotherapist, speaker, and author of the globally acclaimed book, ‘Ten To Zen’. He has over 25 years experience in the mental health sector and is a former NHS Mental Health Clinical Lead, who now runs a successful private practice in London. Owen’s experiences have provided him with the necessary skills to analyse any mental, emotional, or stress-related issue with the utmost efficiency.

Winston Ben Clements is a culture specialist with an emphasis on Resilience and Diversity & Inclusion.

Marc Koska is an entrepreneur and keynote speaker who developed the revolutionary disposable syringe, the iconic K-1 syringe, the world’s first ‘auto-disable’ syringe for the curative market.

It is believed his invention has helped to save more than 9 million lives and has been awarded an OBE for his ‘Contribution to Global Healthcare.’

Nicolas Hamilton is an inspirational speaker and motivated who has become a successful motor racing driver, despite suffering from Cerebral Palsy. With sheer determination and desire, Nicolas has proved the doctors wrong. His life was not going to be ruined by his condition and seeing others with more severe Cerebral Palsy, Nicolas realized he was quite lucky and with much persistence could make racing a reality

Rob Forkan is the co-Founder of the Gandy Brothers with his brother Paul and is an inspirational business speaker and speaker on overcoming adversity. On Boxing Day 2004, Rob and Paul Forkan’s lives were forever changed when they tragically lost their parents in the devastating Tsunami that hit Sri Lanka. Raised to believe they should do more in life than just exist, they were instilled with the notion to enjoy life and to take more adventures. They wanted to honour their parents and Gandy’s was born.

Shahin Sadafi is an engaging and compelling inspirational speaker and business specialist who has overcome not one but two major tragedies to become an influential and inspiring leader. He was working away from home on the 14th June 2017 when he received a call in the middle of the night to say that Grenfell Tower was on fire and he raced home as soon as possible to find his family and help others. The end was devastating. 71 people died and 70 people were injured and most of the building was destroyed.

Shahin and everyone’s lives were changed forever. But in this moment of extreme tragedy, a community came together and working with residents and the wider community Shahin established Grenfell United – an association with the ultimate mission to unite the bereaved families and survivors with a strong and dignified voice, as well as assisting with their immediate and long term needs which included campaigning for justice, access to housing and charitable funds, trauma support and taking part in major fundraising projects.

For more information on any of the speakers for your International Mens Day event please do contact us on 020 8854 7247 or email enquiries@scampspeakers.co.uk