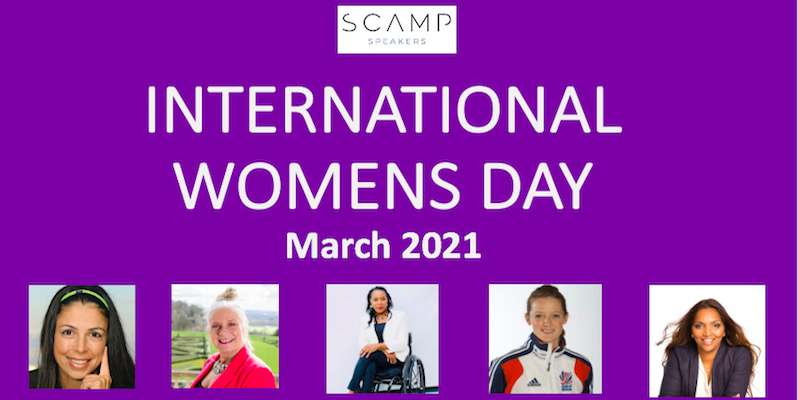 Monday 8th March 2021 marks International Women’s Day and whilst it is not possible to hold any in-person events at this time, if you are looking to mark this day with an online event for your staff or clients, these are just a few of the inspirational female speakers we would recommend for your event.

Awarded the MBE for recognition of her long-term work within entrepreneurship and business, Alison Edgar MBE is known as “The Entrepreneur’s Godmother” to a plethora of the world’s most successful entrepreneurs and brings an amalgamation of outside of the box thinking, insight, and knowledge to the world of professional development. Her Speaking topics include the Secret of successful sales and Intrapreneurship – An Employee Outlook to name a few.

Ann Hiatt is a Silicon Valley veteran and speaker with 15 years of experience as the Executive Business Partner for Jeff Bezos, Founder, and CEO of Amazon, and Eric Schmidt, CEO/Executive Chairman of Google. Ann now works as a consultant and speaker applying the lessons of innovation, ambition, growth at scale, and forward-thinking leadership that she learned at Amazon and Google to help businesses expand and individual careers grow.

Anne Wafula Strike, MBE, is an inspirational and motivational speaker who draws on her own life experiences and achievements to inspire her audiences. Born in Mihu, Kenya, to Nekesa Ruth and Athumani Wafula, Anne was a fit and healthy child before polio struck when she was two years old. 2004 marked the beginning of an Olympic career when Anne became the first wheelchair racer from Sub-Sahara Africa to compete at the Paralympics in Athens. In 2006 Anne became a British citizen and joined Team GB and in 2007 she was officially recognised by the Queen at a Buckingham Palace reception for her work as a disabled athlete and for her involvement in charity work for people with disabilities.

Dr. Beth Healey is an Emergency Medicine doctor and inspirational speaker and has worked for several years in the NHS as well as a variety of international settings. As part of medical and logistical support teams, she has worked in a number of extreme and remote environments including Svalbard, Siberia, Greenland, Antarctica, and the North Pole. Most recently during the COVID19 pandemic, she has drawn on her personal experience and research into isolation to share advice and coping strategies to help reduce anxiety during governmental lockdowns and self-isolation.

Helen Richardson Walsh won a Gold Medal as part of the GB women’s hockey team at the 2016 Olympics and is a keynote motivational speaker and speaker on equality. Helen has competed in four Olympic Games and was the youngest ever woman to represent GB hockey at an Olympics in 2000. The significance of her gold in 2016 was made all the more memorable as she was part of the first same-sex married couple to win an Olympic medal playing for the same team. Her wife was GB captain Kate Richardson-Walsh, and they entered history when they stepped onto the podium.

Liza Pavlakos is a successful entrepreneur and a powerful speaker who has inspired over 100,000 audiences across six continents. Founder of Positive Breakthroughs, she is a qualified psychotherapist and transformational executive coach empowering others to succeed in the face of adversity

Her life story is a narrative of grit and gravitas, a tale of one woman’s journey of overcoming the impossible adversities and triumphing against all odds, inspiring others to thrive. Her speaking topics include beyond survival & becoming by overcoming. (** based outside the UK)

Maria Conceicao is an inspirational speaker and is the first Portuguese woman to summit Mount Everest, trek to both the North & South Poles, and do this all in aid of raising money for a charity she founded herself. In 2005 she took a fateful flight to the Bangladeshi capital Dhaka. It was here she witnessed extreme poverty in the slums of Bangladesh, which was made even more poignant given the life of luxury enjoyed by many in Dubai. Her fundraising exploits have seen her climb Mount Everest, trek to both poles and she currently has 8 Guinness World records for running an ultra marathon, and iron man triathlons despite having no background in the sport. She even attempted to swim the treacherous English Channel only a year after learning to swim, but despite not succeeding her attempt won the hearts of many people. (based outside the UK)

Dr. Sabrina Cohen-Hatton has been a firefighter since she was eighteen years old. She is now one of the most senior female firefighters in the UK and an inspirational speaker. Sabrina was born in South Wales but at the age of 15, she was made homeless after her father died of a brain tumour and she ended up selling The Big Issue and slept on the streets of Newport, Wales. After leaving school at sixteen, she joined the fire service in Wales. While climbing the ranks, she studied at the Open University and then at Cardiff University, eventually completing a Ph.D. in Psychology. An inspirational speaker on breaking down barriers and overcoming adversity

If any of these speakers are of interest for your International Women’s Day Event (or any event) please do drop us a line at enquiries@scampspeakers.co.uk or call on 020 8854 7247. For further ideas of speakers for IWD please do also click here