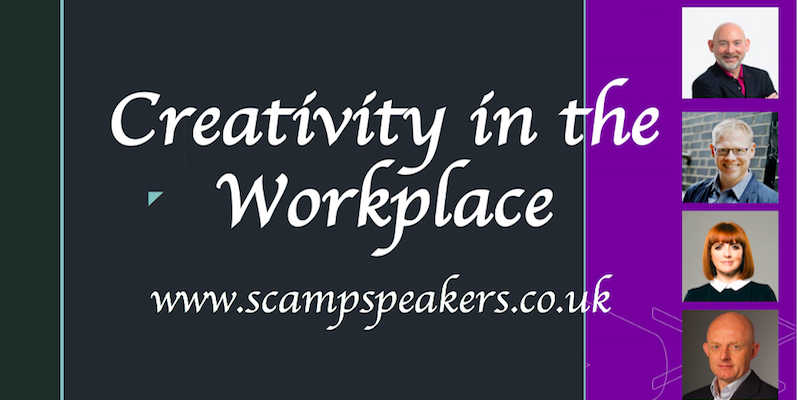 Whilst there has been a growing demand for speakers on mental health, diversity, and speakers on resilience we have also seen a number of recent enquiries for speakers on creativity. With many of us working from home, it might be harder to get those creative juices flowing and these are just a few of the speakers we work with whose speeches can help inspire and help generate new ideas.

Jon is best known for being an award-winning international keynote speaker, content strategist, and co-author of Newsjacking: The Urgent Genius of Real-time Advertising. As your friendly neighbourhood “Real-Time Guy,” Jon makes you more memorable in the moment. How? Well, he’s worked with top brands as an influencer marketing specialist through TBC Global, his marketing consultancy with a focus on sport and travel brands. He helps these brands find their impactful story, and his workshops often help tease this out through interactive games that amplify the learning through competition and play.

Cally Beaton is a media executive, entrepreneur, performer, and keynote speaker on leadership culture and change. At Viacom, Cally oversaw a £500million budget for channels including Nickelodeon, MTV, Comedy Central, and Paramount and including programmes from South Park to Friends, Russell Howard’s Good News to SpongeBob SquarePants. Responsible for selling programmes and formats around the world she combined working with on-screen and production talent with business planning and strategy, bridging the divide between creative and financial priorities. It was working on Comedy Central that saw Cally develop her other life as a standup comedian. Cally speaks on how to be creative whilst keeping an eye on the bottom line.

Julie Deane is the founder & CEO of The Cambridge Satchel Company and is a keynote and business speaker on entrepreneurship, creativity, and branding. The Cambridge Satchel Company was initially set up with just £600 to make traditional leather satchels for the schoolchildren of Cambridge. Since then the company has grown and grown and employs more than 140 people selling to over 120 countries, and Julie has been awarded the OBE for services to Entrepreneurship.

Guy Browning is an engaging business speaker on creativity and innovation and an experienced conference host. His speeches are a mix of serious business messages and advice but with a slice of humour. Guy started his career in a comedy duo but soon went into advertising with Darcy Macius Benton Bowles. He went on to become the Creative Director of the Added Value Company before setting up his own business, Smokehouse, which organises events around the world. Guy, gets groups thinking differently about their job, their company, and their whole sector. Introduces creative thinking skills but also making-things-happen skills. He focuses on new products, better service, and stronger teamwork.

Neil Mullarkey is the co-founder of the world-famous improvisation group The Comedy Store Players and is a leading speaker on creativity and communication skills and can also run workshops on improvising and improving communication. Neil also has an alter ego – L Vaughan Spencer a life coach, self-help guru, and Gangsta Motivator. His Edinburgh show “Don’t Be Needy Be Succeedy” won Fringe Report Award for Best Satire during a legendary run at the show.

With a Triple First Class, science and philosophy degree from Cambridge University—and over 20 years hard-won experience advising exponential unicorns and ambitious blue-chips on the frontlines of disruption—Nick Jankel is a highly sought-after professional speaker whose life’s work is to ensure people have the tools they need to adapt to relentless change and the mindsets they need to successfully transform their organizations and themselves. Nick speaks on many subjects including how to unleash the creative potential of people and prevent the organisational ‘immune system’ from crushing ideas and individuals before transformations are landed.

Shed Simove is a well-known speaker and entrepreneur who specialises in speaking on creativity and innovation. Following a degree in Experimental Psychology and two years working in DisneyWorld, Florida, Shed worked in TV Production, heading up programmes including ‘The Big Breakfast,’ ‘Space Cadets,’ and ‘Big Brother.’He soon became known for making innovative, ground-breaking television shows, and helped discover and launch many TV Star’s careers, including Kelly Brook, Tess Daly, and Russell Brand. Shed speaks on innovative thinking and creativity.

Tim Reid is a speaker on inspiring creativity and innovation and is probably best known for co-creating and co-writing the BAFTA-winning BBC One sitcom, Car Share, and more recently Dave’s Meet The Richardsons.

When he is not writing comedy for TV he still preaches what he practices and delivers talks and trains teams across the world in how to up their creativity and land bigger, better ideas.

If you are looking for a speaker on creativity and like some more information on any of the above or further ideas – please do email us at enquiries@scampspeakers.co.uk