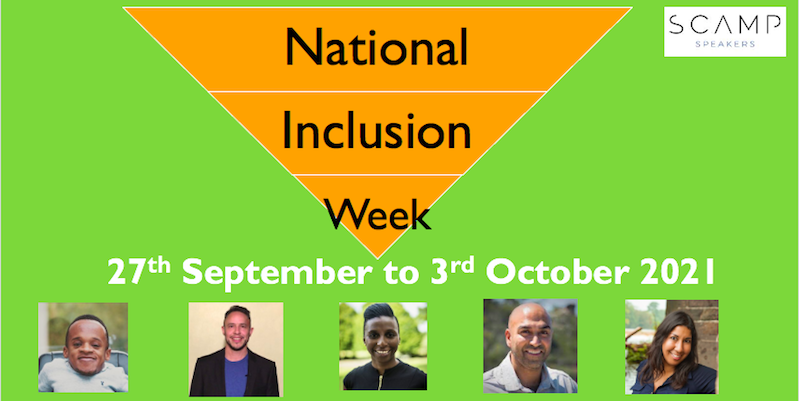 This year’s Inclusion Week 2021 will take place from Monday 27 September 2021 to Sunday 3rd October 2021. The campaign is organised by Inclusive Employers a membership organisation established to help employers create inclusive workplaces and the week is designed to celebrate everyday inclusion. The theme for 2021 is “Unity”.

If you are planning an event that week, either in person or online, these are just some of the speakers we work with who could be of interest.

Amar became known to millions through the groundbreaking BBC2 reality series, Beyond Boundaries, a jungle endurance expedition across Central America. Screened worldwide, this was a grueling 220-mile trek on foot across the rugged interior of Nicaragua, from the Atlantic to the Pacific coast.

Donna Fraser is a 4x Olympian and former 400m sprinter for Great Britain, with a successful athletics career that spanned over 20 years and has a host of European, Commonwealth, and World medals. Donna, unfortunately, retired in 2009 due to being diagnosed with Breast Cancer. She was recognised with the Freedom of the Borough of Croydon in 2018 for services to sport and continues to be enthused to help inspire a generation through education by ‘giving back’ and sharing her knowledge and experience with young people aspiring to achieve their goals.

Matt Ellison speaks on a number of topics including –

Kess Eruteya is the (20-year old) Founder of InclusionZ and a keynote speaker on Generation Z, Diversity and Inclusion, and Corporate Social Responsibility. InclusionZ is an emerging startup that bridges the gap between leading corporations and Gen Z audiences/talent. Kess directs leading industry brands like LinkedIn, ExperianChubb to attract, engage, and retain Gen Z.

Alongside serving corporations, she is building Technology that matters. Her e-learning platform provides career-development support to thousands of young individuals in over 19 countries.

Whether she is participating in panel discussions with industry leaders like UNICEF’s CMO, conducting entrepreneurship sessions at global conferences, or consulting top corporate companies about Gen Z talent, Kess thrives on impacting the audience.

Her speaking topics include:

Anj Handa is the Founder of Inspiring Women Changemakers, a community of changemakers who stand for fairness and safety for women. Named as one of Grant Thornton’s 100 Faces of a Vibrant Economy in 2018, described by i-news as ‘a bloody brilliant woman’ and winner of the AFSA Positive Action Award, Anj was recently recognised in Forbes as one of the 10 Diversity & Inclusion Trailblazers You Need to Get Familiar With.

She is recognised as an authority on diversity, equity, and inclusion, with in-depth knowledge of UK equality and employment policies and international best practice in leadership.

Anne Wafula Strike, MBE, is an inspirational and motivational speaker who draws on her own life experiences and achievements to inspire her audiences.Born in Mihu, Kenya, to Nekesa Ruth and Athumani Wafula, Anne was a fit and healthy child before polio struck when she was two years old. She was given the middle name of Olympia at birth, a title of prophetic significance for the future and prescient of hurdles she would face in forthcoming years.