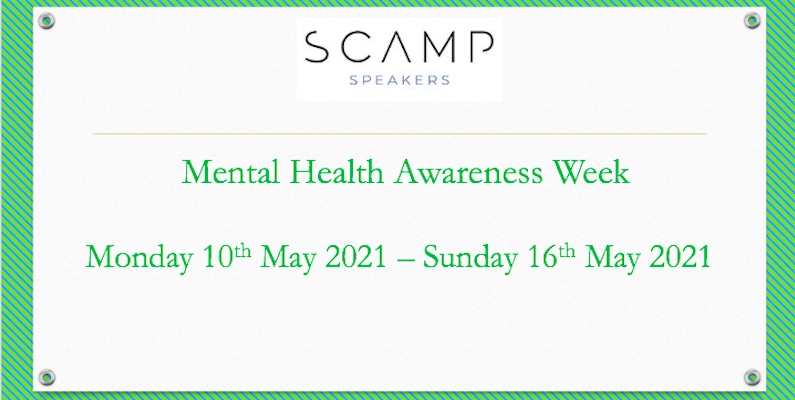 Hosted by the Mental Health Foundation, Monday 10th May 2021 to Sunday 16th May 2021 is Mental Health Awareness Week. Whilst its theme for this year is Nature & Environment, and looking at the benefits nature can bring to our mental health it is also an opportunity for people to talk about all aspects of mental health.

If you are looking to host an event that week these are some of the speakers we work with who could be of interest.

Clarke Carlisle is a former professional football and television presenter who is a keynote speaker on mental health. For the last 13 years of his playing career, he had been suffering from Complex Depressive Disorder. It was only after two suicide attempts that he was admitted to a psychiatric hospital, where he finally received an accurate diagnosis. Since then he has set up the Clarke Carlisle Foundation for Dual Diagnosis.

Dual Diagnosis is the condition of suffering from a mental illness and a substance abuse problem at the same time, and Clarke and his team are working towards opening a facility to provide treatment for all those who suffer from Dual Diagnosis.

Dan Keeley is one of the UK’s leading mental health activists, thought leaders, and keynote speakers on a mission to empower the UK to speak up when they are suffering. In 2017, after a 5 year battle with bipolar disorder and coming close to taking his own life, Dan ran 1250 miles from the Colosseum in Rome back to the London Eye to share his story on a national scale – raising over £15,000 for The Campaign Against Living Miserably and inspiring hundreds of others to speak up about their own personal battles. Now Dan is a nationally-recognised and award-winning mental health activist, thought-leader, and keynote speaker; harnessing his lived-experiences to inspire others by collaborating & delivering powerful live talks with many of the UK’s most forward-thinking corporate organisations, conferences, NHS trusts, festivals, schools, and social enterprises dedicated to improving the mental wellbeing of their staff, audiences & communities.

Jack Nolan is one of the UK’s youngest Mental Health and Empowerment Speakers, Dyslexic Author, and winners of the world! Surviving two mental health breakdowns and being diagnosed with Bi-Polar, Jack bounced back, turning his negative circumstances into an opportunity to bring value to people’s lives. Jack Nolan is now 23 years of age and has published 2 novels, his second called ‘Dead Ends’. Jack has also created a series of positive and inspirational reads, from a collection of Poems; The Intuitive Mind; You Can Become Playbooks; Thoughts and Wisdom; A collection of personal quotes, and YCB’s All and Everything, an inspirational read of motivational materials.

Katie Maycock is a Burnout Specialist and Speaker. She specialises in talking about the impact that stress has on the body and mind and how it can reduce productivity, mental clarity, and how it’s limiting people.

With a focus on physical health, mindset, and business structure, Katie works with people ensuring they can work at their peak.

Sue Firth is a business psychologist, stress expert, and a leading authority on stress and managing change. She is also a specialist in helping CEOs and senior executives manage stress, from an individual and group perspective. As an international speaker and presenter Sue regularly appears in the media and has featured as a guest expert on ITV’s This Morning and BBC Panorama.

Sue aims to make a difference in the way people think and teaches how to moderate habits to reduce any difficulties while maintaining effectiveness. With extensive experience in consulting at a strategic level for both the management of change and the implementation of stress programmes to support employees, she is well placed to offer insight into how organisations can help their people handle life better in changing circumstances.

Ruby Wax is best known for her 25 years in front of the camera working for the BBC and is a conference speaker on leadership and mental health.

In 2014, Ruby obtained a Masters degree in Mindfulness-based Cognitive Therapy from the University of Oxford to increase her understanding of the brain and the science behind mental health issues. She also has a Masters in Psychology from Regents College, where she is also an Honorary Senior Fellow. Also, Ruby is Visiting Professorship in Mental Health at the University of Surrey and is soon to be awarded an Honorary Doctorate from the School of Psychotherapy at The University of East London.

Alastair Campbell is best known for his role as former British Prime Minister Tony Blair’s spokesman, and is a speaker on politics and communication as well as being a mental health speaker. Alastair was the press secretary and director of communications and strategy for Tony Blair. Still active in politics and campaigns in Britain and overseas, he splits his time between speaking and writing, whilst also working with charities and consulting.

He co-founded the all-party campaign, Equality4MentalHealth, which was credited in Parliament by then Chancellor George Osborne with securing an extra £600million for mental health services.

If you are looking for any speakers during that week please do drop us a line at enquires@scampspeakers.co.uk