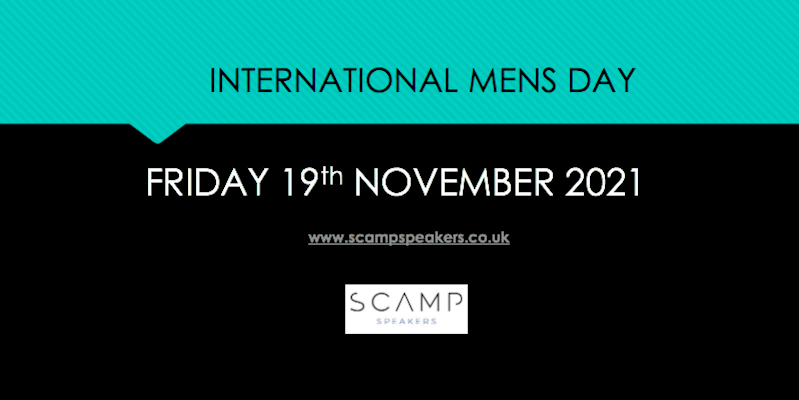 Friday 19th November 2021 marks International Men’s Day. The day celebrates the positive value men bring to the world, their families, and communities. The day highlights positive role models but also helps to raise awareness of men’s well-being and to promote gender equality not only for men but for women too.

His story was picked up in the documentary Simon’s War and was followed by millions of people across the UK. Simon has endured years of reconstructive surgery and has undergone over 70 operations and yet has an endearing positive spirit, that has made him one of the UK’s most respected and inspirational icons. His message is one of achievement, of triumph in the face of adversity, and of seizing the moment and succeeding.

Life dealt Jamie McAnsh a set of cards and he decided he was going to play poker. Looking at his challenges from outside the box Jamie has overcome adversity in an amazing style. In January 2014, Jamie woke up Paralysed from the waist down. He was diagnosed with a functional neurological condition called Complex Regional Pain Syndrome (CRPS).

Instead of focusing on a restricted life in a wheelchair, he has focused on living life outside the box. Jamie is a sports personality capped for wales in rugby in 2014 and currently plays wheelchair basketball for Cardiff. He is the first disabled Squash player in the world to play squash in a Welsh Open Tournament and he’s currently ranked in the world rankings and he has gone on to compete in the Welsh Open Master in December 2018, the Slovenian open masters in April 2019. Jamie still stands as the only registered player with a lower limb impertinent.

Fabrice Muamba is an inspirational speaker and a former footballer who was forced to retire from the game when he suffered a cardiac arrest on the pitch playing against Tottenham Hotspur in the FA Cup. In one of the most distressing scenes in the history of football, Fabrice collapsed on the pitch mid-match against Tottenham, and despite his heart stopping for 78 minutes, thanks to the quick response of the medical team and due to his level of fitness, he went on to make a remarkable recovery, finally being discharged from hospital just over a month later. Fabrice speaks on resilience, overcoming adversity, and health and wellbeing

Josh Littlejohn is one of the world’s leading social entrepreneurs and inspirational speakers having founded pioneering social enterprises and led a global movement to tackle homelessness and displacement.

Josh began working on the homelessness issue when he founded Social Bite, a social enterprise in Scotland with a mission to eradicate homelessness in the country. Social Bite started as a small chain of sandwich shops that began offering jobs and free food to homeless people. The cafes shot to global fame when Hollywood A-lister George Clooney visited an outlet in Edinburgh in 2015. Another Oscar winner Leonardo Di Caprio then visited the social enterprise in 2016. Social Bite has employed over 100 homeless people and gives out over 140,000 items of free food each year to those in need. Social Bite has also been visited by Prince Harry and Meghan Markle and The Duchess of Cambridge.

Rob Forkan is the co-Founder of the Gandy Brothers with his brother Paul and is an inspirational business speaker and speaker on overcoming adversity. On Boxing Day 2004, Rob and Paul Forkan’s lives were forever changed when they tragically lost their parents in the devastating Tsunami that hit Sri Lanka.

Raised to believe they should do more in life than just exist, they were instilled with the notion to enjoy life and to take more adventures.They wanted to honor their parents and Gandy’s was born.

Marc Woods is a Paralympian gold medallist swimmer and an established and respected motivational speaker on leadership, teamwork, and communication.During his 17 years of competition, he won a staggering 12 Paralympic medals from 5 Games, 4 of those medals being gold. Marc also won a further 21 medals from the European and World Championships.

Marc was diagnosed with cancer at 17 and consequently had his left leg amputated below the knee. Not knowing how long he had left to live, he was determined to make the most of whatever time he did have.

Marc has gone out and done just that and became a member of Great Britain’s Paralympic Swimming Team, a multiple Gold Medallist, BBC commentator, and author. His distinctive, open style demonstrates his passion for life, translating into a moving and motivating experience for audiences.

Richard McCann is an inspirational, powerful, and moving motivational speaker, and founder of the ICan Academy designed to help ignite people’s mindsets and allow them to grow, develop and become more successful

If you looking for a speaker to mark you International Mens Day event please do email us at enquiries@scampspeakers.co.uk