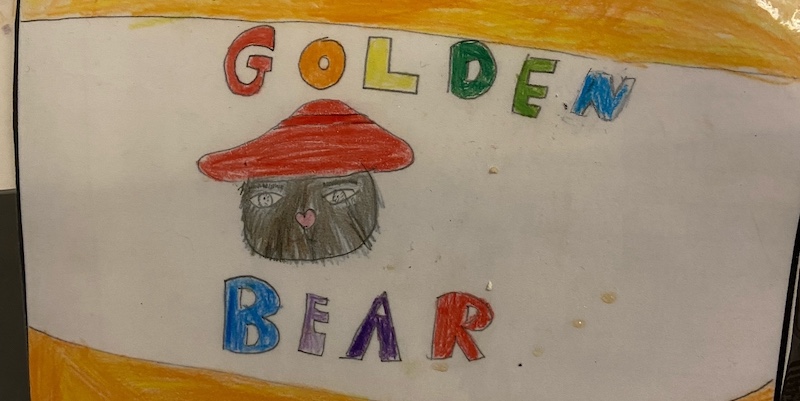 Before the end of term my son and a group of his classmates had a school project to pitch an idea of their own new marmalade brand to the class and the best pitch won. They came up with Golden Bear Marmalade and came second in the whole year – which was fantastic.

The impact of the pandemic has seen a growth of people starting their own businesses and whilst Golden Bear Marmalade may not ever hit the shelves (who knows!), we do work with a number of speakers who have taken an idea and build their own businesses – sometimes from their basement at home.

Bianca came to the public’s attention in 2014 after an excellent performance on the BBC show, The Apprentice. Despite finishing runner up, she was determined that her idea for a diverse range of nude hosiery become a reality and in November 2015, ‘Bianca Miller London’ was launched online

Since then the brand has launched with Global Fashion Destination ‘Topshop’ in September 2016, QVC, and the Morleys Group in 2017. Sitting alongside “Bianca Miller London” is “The Be Group.” Founded by Bianca, it is a specialist provider in personal branding, image consultancy, and employability skills training.

Sahar Hashemi was the founder of Coffee Republic, the UK’s first US-style coffee bar chain, and a popular choice of speaker on themes such as entrepreneurship and business start-ups.

With her brother Bobby, she gave up her career as a lawyer in London and staked everything on a dream and made Coffee Republic one of the leading players in the coffee revolution that transformed the UK high street

It grew into one of the UK’s most recognised high street brands with 110 bars and a turnover of £30m.

Currently, the founder of The Coconut Collaborative, a yogurt business that uses coconut milk, James is a serial entrepreneur who knows the secrets to success and creative marketing.

Gü Chocolate Puds was the fastest growing food company in the UK and credited with revolutionising the standard of desserts. James built the brand with hard work and passion and sold it for £32 million.

Dave Fishwick is an entrepreneurial speaker, and owner of one of the leading minibus firms in the UK, but often best known to many for his Channel 4 Show “Bank of Dave.”

Having left school without any qualifications, Dave’s story is one of hard work, dedication, and the will to succeed that makes him one of the UK’s most in-demand speakers.

Having initially started as an apprentice builder, Dave started to buy and sell cars and began to make a profit. This grew and grew, and David Fishwick Van and Minibus Sales is now the largest minibus supplier in Britain, offering affordable minibuses for schools, sports teams, community groups, and local authorities. The business now has a multi-million-pound turnover, but not one to rest on his laurels, Dave decided that he wanted a new challenge and that was to take on the banks

Dave set out to create his own bank, and his story was followed on the Channel 4 hit show “Bank of Dave.” The bank was started with his own money and promised to give all profits to charity. Offering loans to businesses who otherwise struggled to get finance, and offering hands-on advice, Dave set out to send it into profit with 180 days.

Jo Fairley is the co-founder of Green & Black’s Chocolate and is in demand keynote business speaker on entrepreneurs, branding, and marketing. Green and Black’s is a chocolate company specialising in organic chocolate. Started in 1991, the company has grown and grown and in May 2005 was sold to Cadburys and has worldwide operations in the USA, the UK, Canada, and Australia.

Jo Fairley had left school at 16 with six ‘O’ Levels, and through hard work and determination, she became a serial entrepreneur via an award-winning organic and natural food store/bakery (Judges Bakery), The Wellington Centre (a boutique nine-room wellbeing centre) – both in her home town of Hastings – and most recently The Perfume Society, which sets out to help individuals develop their sense of smell via exploration of fragrance and the scented world.

Harry Daymond is an inspirational award-winning young entrepreneur, business speaker, and founder of Kart Kompany Ltd & the Cocktail Connoisseurs. Winner of the Young Start-Up Talent Award, selected in the Transferwise 20 Under 20 and Ernst and Young Founders 30, Harry launched his first business Kart Kompany Ltd when he was just 15 years old.

The company started over a school summer holiday when Harry decided to build a fully collapsible vintage cart with his Grandfather in his garage, and then started serving sweets off it for weddings and events. Throughout his GCSE and A-level years, he grew the business, joining networking groups and approaching venues in his free time. After college, he decided to not go to University, and instead pursued a digital marketing apprenticeship, allowing him to continue to run his business in parallel.

18 months later having worked a 9 am to 5.30 pm job, using his holiday, lunch breaks, and evenings to run his business, the Kart Kompany now operates multiple services, with the newest being the Cocktail Cart.

After being taught how to make jam in his Grandmother’s kitchen in Scotland, he came up with a way of making jam 100% from fruit. At sixteen, he presented his brand, SuperJam, to Waitrose and went on to become the youngest ever supplier to a major supermarket.

Paul Hargreaves is the Founder and Chief Executive of Cotswold Fayre Ltd and a keynote speaker on leadership and compassion in business. Cotswold Fayre is a specialty & fine food wholesaler supplying nearly 2,000 retail outlets throughout the UK.

The business grew from the cellar of Paul’s house to become the leading wholesaler to UK farm shops and delicatessens. The company’s ethos of working in partnership with its suppliers makes it the most sought-after wholesaler for the many new brands launching in the sector.

If you are looking for a speaker on entrepreneurialism please do drop us an email at enquiries@scampspeakers.co.uk