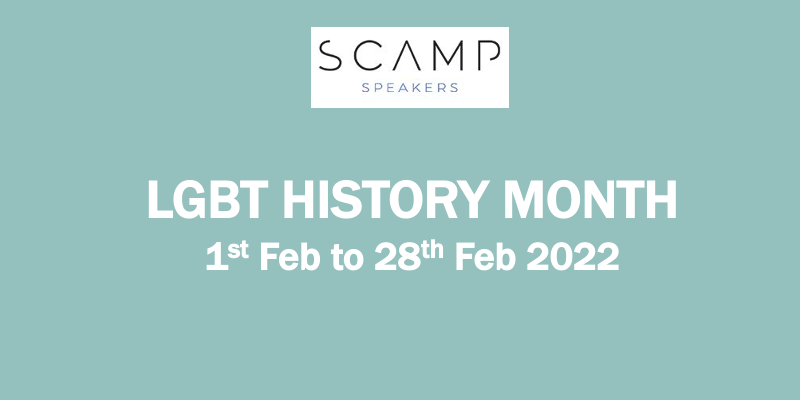 UK LGBT History Month once again takes place from the 1st February 2022 to the 28th February 2022. The month marks the opportunity to celebrate LGBT culture and progress towards equality over time, and to explore what the lessons of history can teach us for the future.

If you are looking to plan either an online event or an in-person event this February to mark UK LGBT History Month – these are just a few of the speakers we would recommend.

Matt Ellison speaks on a number of topics including –

Helen Richardson Walsh speaks about her success at the 2016 Olympic Games and how a combination of team values, behaviours, and tactics can create a winning culture ‘Be the Difference, Create History and Inspire the Future’ was their team mantra.

Helen and Kate Richardson Walsh have recently published a book together called Winning Together: An Olympic-Winning Approach to Building Better Teams

A former Welsh Rugby player, Gareth Thomas has become one of the most iconic figures in rugby, when he revealed he was gay – making him at the time the only openly gay high-profile sportsman in the UK.

Named BBC Wales Sports Personality of the Year in 2005 in recognition of his outstanding achievements. Off the field, Gareth Thomas’s personal life hit the headlines when he famously revealed to the world that he was gay. Since ‘coming out’ Gareth’s profile has risen dramatically with high demand for appearances in television documentaries, chat shows, and feature films both in the UK and abroad, and in August 2010 he was voted top of the Pink List for the 101 Most Influential Gay People in the UK.

Gareth corporate talks about his sporting career, as well as his personal life and the difficulties he experienced when trying to come to terms with his sexuality.

In 2007 became the first former NBA player to come out publicly and was considered one of the world’s most high-profile gay athletes. His memoir “Man in the Middle” was a New York Times bestseller. John appears regularly as a pundit for CNN, MSNBC, CBC, and the BBC. He has also appeared on shows like BBC Breakfast, The Daily Show, Real Time with Bill Maher, Oprah, and many more.

Having formed his own Performance Company, John Amaechi is a regular speaker at conferences and events across the world. Topics have included the impact of depression, interpersonal skills, leadership, team cohesion, emotional literacy, and diversity and inclusion on individual and team performance.

Mark Foster is one of the UK’s most recognisable swimmers of his generation and is an inspirational and motivational speaker who speaks on winning, improving performance, and diversity in sport.

Mark has enjoyed a successful TV career and was a fixture on BBC’s coverage of the Olympics, and he cemented his position as a household name after covering swimming in London 2012 from the commentary box and gaining headlines for his coverage alongside Rebecca Adlington and Helen Skelton at Rio 2016.

Mark Foster is a much respected and sought-after motivational speaker who uses his experiences as an athlete and world champion to inspire businesses.

If you would like any more details on the speakers please email us at enquiries@scampspeakers.co.uk or call on 020 8854 7247