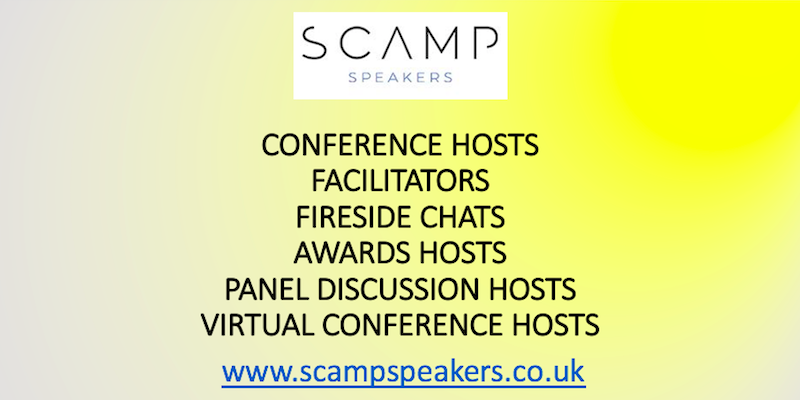 In a typical events year, the autumn often proves a popular time for awards events and annual conferences. With live events starting to return, we have seen an increase in enquiries for conference hosts and awards hosts.

If you looking to plan your awards or conference later in the year and looking for a host or facilitator or some to host a fireside chat these are some of the speakers we work with who could be a ideal fit.

Andrew Wilson is a vastly experienced news presenter and award-winning foreign correspondent and an experienced conference host and facilitator. A former Sky News presenter, he reported on the fall of the Berlin Wall in 1989, and covered almost every major conflict around the world, from Kuwait to Bosnia, and from Haiti to Chechnya. He was a correspondent for TV-am in Hong Kong and Johannesburg, and at Sky News was a correspondent in Moscow, Jerusalem, and Washington, winning international awards for his coverage from all three postings.

Angela Lamont is a vastly experienced Conference Host, Conference Facilitator, and Awards Presenter, whose specialty is presenting science, technology, and engineering events and television shows. Her television work is extensive and worked on over 200 programmes and host hundreds of conference and live awards events. Angela is known for her intelligent but down-to-earth presentation style. She has presented from BBC Television Centre, Buckingham Palace, the top of a volcano in Japan, and from a fishing boat in a force eight gale.

Declan Curry is a former BBC Business Presenter and popular conference host and facilitator as well as an after-dinner speaker on the economy. A familiar face from television, he reported for BBC One’s “Breakfast” and “The One Show” as well as BBC Two’s “Working Lunch,” and “Your Money” on the BBC News channel. Declan hosted “On The Money,” a weekly review of business and enterprise for BBC Radio 5 live and broadcast daily segments from London for ABC News in the United States. He has been explaining business and the economy for more than two decades; not only on TV and radio, but for newspapers and magazines, and on websites, blogs, and social media.

Helen Fospero is a TV journalist, reporter, and News presenter who is regularly invited to host awards events and chair conferences. A regular on BBC1’s The One Show and Watchdog, Helen’s career started in newspapers, and before she became a correspondent and presenter of live rolling news for Sky. From interviewing politicians to businessmen and women to celebrities, Helen’s warm style led her to the sofa at GMTV where she became their main newsreader and occasional host. Helen spent time as ITV’s U.S. correspondent based in New York, where she covered the US presidential elections and was the only British TV journalist to witness the twin towers come down in New York on September 11th. She spent the next year reporting on the terrorist threat.

Kelly Cates is one of Britain’s top broadcasters. She fronts Sky Sports coverage of the Premier League and BBC Five Live’s sports coverage including the World Cup, Olympics, Premier League, Champions League, and Europa League. She also presents a weekly show on the global Premier League Channel with Ian Wright. She fronted Channel 4’s coverage from the Sochi 2014 Paralympic Winter Games in Russia alongside Jonathan Edwards, Ade Adepitan, and Arthur Williams and the award-winning Channel 4 Paralympic breakfast show alongside Rick Edwards. Kelly was part of ITV’s World Cup coverage from South Africa in 2010 and was previously part of their Champions League and Europa League coverage.

Nadia Dunn is an experienced award, conference host, and facilitator. Nadia has worked at the BBC for 18 years, she started as a runner and her ambition has pushed her through to the top of her game in the media industry and she is now an established TV Director/Producer and Presenter. Nadia Dunn started presenting content for BBC Sport at Wimbledon and continued onto Children’s Television. After hosting her first awards ceremony in 2011 Nadia found a passion for such events and continued to excel in this field, traveling around the world to host events and present video’s across many industries.

Will Gompertz is the Director of Arts and Learning at The Barbican, a position he took up from June 2021. He is the author of the international bestselling art history book What Are You Looking At? and is one of the most respected commentators on The Arts and a speaker on creativity.

Voted one of the World’s Top 50 Creative Thinkers by New York’s Creativity Magazine, Will was previously a Director of The Tate Gallery.

Katie Derham is a former News Presenter and now Radio 3 Presenter, who presents the Proms on BBC television and is a fantastic conference host and awards host.

Known to many initially as a newsreader Katie spent the first 15 years of her broadcasting career in current affairs, first at the BBC then at ITV’s as their youngest ever newsreader. She has since moved away from mainstream news and is a presenter on BBC Radio 3 and is one of the station’s best-known voices.

Jeff Grout is a specialist speaker on leadership and change and is the former Managing Director of Robert Half International and former business manager to Sir Clive Woodward. Robert Half International is the largest specialist recruitment consultancy in the world and Jeff worked for the organisation for 21 years helping it grow from 12 staff members into a business with a £65million turnover and over 360 staff.

Jeff was the business manager to Sir Clive Woodward from 2002 to 2006, before establishing himself as a business consultant, speaker, and coach specialising in leadership, people management, team building, peak performance, and recruitment.

If you need any more information on any of the above or any other ideas please contact us on enquiries@scampspeakers.co.uk