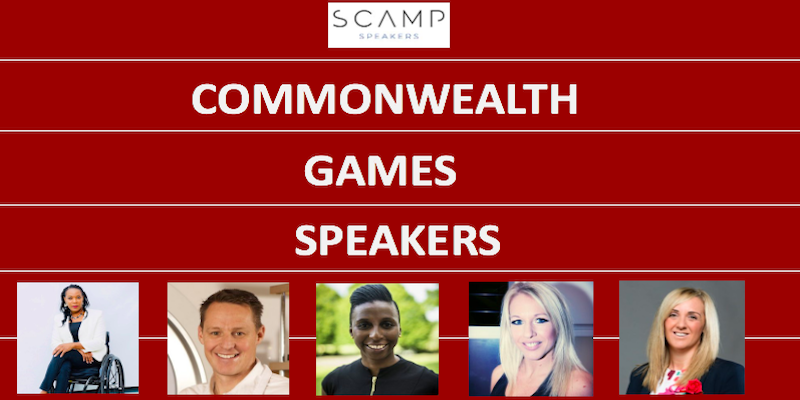 The 2022 Commonwealth Games will take this place this year in Birmingham between Thursday 28th July 2022 and Monday 8th August 2022. It is the first time Birmingham has hosted the Games and unlikely the Paralympics, parasport events are included alongside other sports on the program.

If you planning an event in or around the Games, these are just a few of the inspirational speakers we work with that could be of interest.

Anne Wafula Strike, MBE, is an inspirational and motivational speaker who draws on her own life experiences and achievements to inspire her audiences. Born in Mihu, Kenya, to Nekesa Ruth and Athumani Wafula, Anne was a fit and healthy child before polio struck when she was two years old. After completing A-levels and graduating from Moi University with a Bachelor of Education degree, Anne taught at Machakos Technical College in Kenya before meeting the man she would marry – which lead her to Britain, motherhood, wheelchair racing, disability advocacy, and charity work.

Danny Crates is a highly experienced and sought-after keynote speaker who guarantees excellent returns for his clients way beyond presentation day.  A master storyteller and event host Danny’s 19-years global speaking experience shines through. He is dynamic and presents with warmth and humour, quickly captivating and engaging with his audience.

After losing his right arm in a horrific accident at just 21 years old, Danny was determined to overcome that huge hurdle in his life, focus on the future and regain his positive mental attitude. Danny’s drive and determination saw him back on the rugby field within 6 months and shortly after into Paralympic sport, quickly dominating – famously winning gold in the men’s 800 metres at the Athens 2004 Paralympic Games, a year which also saw him set a new world record. It was the highlight of a glittering international career that saw Danny win every major title in the sport, including the World Championships, European Championships, and Paralympic World Cup.

Donna Fraser is a 4x Olympian and former 400m sprinter for Great Britain, with a successful athletics career that spanned over 20 years and has a host of European, Commonwealth, and World medals. Donna, unfortunately, retired in 2009 due to being diagnosed with Breast Cancer. She was recognised with the Freedom of the Borough of Croydon in 2018 for services to sport and continues to be enthused to help inspire a generation through education by ‘giving back’ and sharing her knowledge and experience with young people aspiring to achieve their goals.

Gail Emms began playing badminton from the age of four and first represented her country in 1995. Gail & Nathan reached the top of the World Ranking, and she retired from her career with a total of 2 commonwealth Golds, 2 European Championship Golds, and a World Championship gold.

Joanna Rowsell Shand is a two-time Olympic Gold Medalist Cyclist, winning Gold in 2012 and 2016, and is a motivational and inspirational speaker on teamwork and overcoming adversity. Joanna came to cycling quite late and was talent-spotted at 15. It was not something she had proactively done before so was a testing challenge for her, but with determination and perseverance, she won junior titles and represented her country at the Junior World Championships.

Between 2010 and 2011 a series of setbacks and unsuccessful tournaments meant her place in 2012 was not guaranteed. However, through her dedication, she recovered and battled back to become World Champion, World Record holder, and Olympic Champion in 2012. She moved into more individual races rather than team races, and in 2014 she won gold at the World Championships and Commonwealth Games in the Individual Pursuit that year.

Marc Woods is a Paralympian gold medallist swimmer and an established and respected motivational speaker on leadership, teamwork, and communication. During his 17 years of competition, he won a staggering 12 Paralympic medals from 5 Games, 4 of those medals being gold. Marc also won a further 21 medals from the European and World Championships.

Marc was diagnosed with cancer at 17 and consequently had his left leg amputated below the knee. Not knowing how long he had left to live, he was determined to make the most of whatever time he did have. Marc has gone out and done just that and became a member of Great Britain’s Paralympic Swimming Team, a multiple Gold Medallist, BBC commentator, and author. His distinctive, open style demonstrates his passion for life, translating into a moving and motivating experience for audiences.

Tracey Neville MBE is the former head coach of the Commonwealth Gold Winning England Netball team and an inspirational and motivational speaker. Tracey was appointed head coach for the England national netball team (The Roses) in 2015. She was instrumental in the team winning their first Commonwealth gold medal on the Gold Coast in 2018.

Tracey Neville won 81 caps for England in her own playing career from 1992-to 2008. Her best achievement during this time was undoubtedly winning England’s first netball medal at the Commonwealth Games in 1998 in Kuala Lumpur.

Roger Black is an Olympic Athlete who has been one of the UK’s most popular motivational speakers in the last two decades. For fourteen years Roger Black represented Great Britain at the highest level in the world of athletics. He won 15 major championship medals including European, Commonwealth, and World Championship Gold medals.

His greatest achievement was winning the Olympic 400 metre Silver medal in 1996 and is often remembered for his Gold Medal Winning 1991 World Championships 4x400m Relay -when the UK surprisingly beat the USA. Roger has been British Men’s Team Captain and was awarded the M.B.E. in 1992.

These are just a few of the sporting speakers we work and more can be found on the website. If we can help with an enquiry in the meantime please email us at enquiries@scampspeakers.co.uk