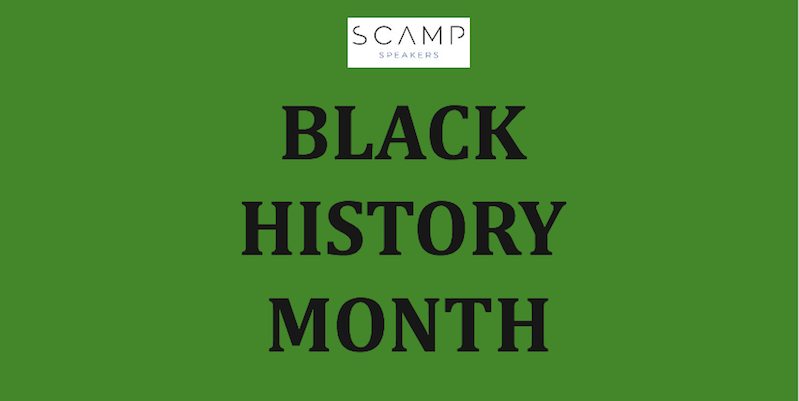 Black History Month runs from Friday 1st October 2021 to Sunday 31st October 2021 in the UK. The month celebrates the contribution and achievements of black people not just in the UK, but throughout the world with its aim to educate everyone on black history.

Donna Fraser is a 4x Olympian and former 400m sprinter for Great Britain, with a successful athletics career that spanned over 20 years and has a host of European, Commonwealth, and World medals.  Donna, unfortunately, retired in 2009 due to being diagnosed with Breast Cancer.  She was recognised with the Freedom of the Borough of Croydon in 2018 for services to sport and continues to be enthused to help inspire a generation through education by ‘giving back’ and sharing her knowledge and experience with young people aspiring to achieve their goals.

Amar Latif is a blind traveler, speaker, entrepreneur, and television presenter with an astonishing track record of facing up to major challenges. Due to an incurable eye condition, Amar lost 95% of his sight by the age of 18. Through sheer determination, he has managed to turn an unpromising tale of loss, into one of inspirational achievement. Amar became known to millions through the groundbreaking BBC2 reality series, Beyond Boundaries, a jungle endurance expedition across Central America. Screened worldwide, this was a grueling 220-mile trek on foot across the rugged interior of Nicaragua, from the Atlantic to the Pacific coast.

Anne Wafula Strike, MBE, is an inspirational and motivational speaker who draws on her own life experiences and achievements to inspire her audiences. Born in Mihu, Kenya, to Nekesa Ruth and Athumani Wafula, Anne was a fit and healthy child before polio struck when she was two years old. She was given the middle name of Olympia at birth, a title of prophetic significance for the future and prescient of hurdles she would face in forthcoming years.

2004 marked the beginning of an Olympic career when Anne became the first wheelchair racer from Sub-Sahara Africa to compete at the Paralympics in Athens. In 2006 Anne became a British citizen and joined Team GB and in 2007 she was officially recognised by the Queen at a Buckingham Palace reception for her work as a disabled athlete and involvement in charity work for people with disabilities.

Clarke Carlisle is a former professional football and television presenter who is a keynote speaker on mental health, having suffered from complex depressive disorder throughout his career. Clarke presented two acclaimed documentaries for the BBC Football’s Suicide Secret and “Is Football Racist?” for the BBC and wrote a book about his career A Footballer’s Life.

What Clarke did not realise was that for the last 13 years of his playing career he had been suffering from Complex Depressive Disorder. It was only after two suicide attempts that he was admitted to a psychiatric hospital, where he finally received an accurate diagnosis. Since then he has set up the Clarke Carlisle Foundation for Dual Diagnosis. Dual Diagnosis is the condition of suffering from a mental illness and a substance abuse problem at the same time, and Clarke and his team are working towards opening a facility to provide treatment for all those who suffer from Dual Diagnosis.

Hayley Mulenda is a Multi-Award Winning International Speaker, Author, and Change Agent who has spoken to thousands of people across the world sharing her story on how she turned her pain to purpose. In under 4 years, Hayley has had the opportunity to share her story drawing from her own experiences, which has resonated with over 40,000 people as she has spoken on some of the world’s greatest stages from The Houses of Parliament to Wembley Arena to Oslo Spektrum as well as working with some of the world’s leading firms running seminars, workshops, and keynote presentations. Hayley specialises in delivering unforgettable and powerful keynotes that show that trials don’t happen to you, they can happen for you. Hayley’s keynote themes focus on wellbeing, vulnerability, and personal development.

After nearly taking her own life at the age of 18 after being overwhelmed by the inability to balance studying, business, and her personal life, Hayley realised how mental health issues are increasingly affecting millennials and she was passionate to do something about it.

Winston was predicted to live a life of isolation and pain due to a rare bone disorder known as Osteogenesis Imperfecta (OI). This condition caused his bones to be extremely fragile, suffering over 200 fractures in his lifetime. Winston Clements has shared his story on stages, conferences, and media platforms all around the world. He has become extremely popular for his keynote speaking appearances due to his ability to deliver inspirational and practical content, in a humorous and relaxed style. Known for his infamous quote “Your Limitations Are An Illusion,” Winston is also a two-time TED Speaker, entrepreneur, mentor, and board member at various organisations.

Nicolas Hamilton is an inspirational speaker and motivated who has become a successful motor racing driver, despite suffering from Cerebral Palsy. Nicolas was only 18 months old when his parents were told that he would never walk and that his eyesight was extremely poor and would deteriorate as he got older.

With sheer determination and desire, Nicolas has proved the doctors wrong. His life was not going to be ruined by his condition and seeing others with more severe Cerebral Palsy, Nicolas realized he was quite lucky and with much persistence could make racing a reality From wheelchair-bound to walking unaided by the age of 17, Nicolas was given the opportunity to race in the highly competitive Renault Clio Cup series. Despite it being his first attempt Nicolas did well and handled it with the same determination he faced daily

If you would like more information on any of the speakers or have an event in mind please do contact us at enquiries@scampspeakers.co.uk or call on 020 8854 7247