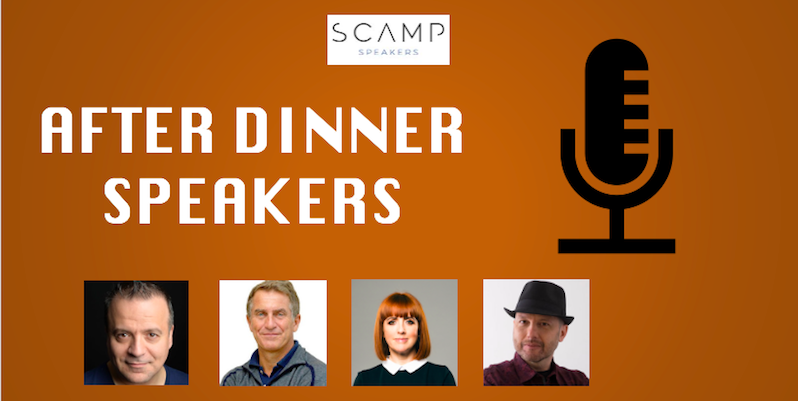 Whilst a majority of our enquiries and bookings are for motivational and business speakers, we do get requests for entertaining after-dinner speakers and comedians too – especially if a client is holding an all-day event and with dinner and they want a speaker in the day and entertainment in the evening.

Below are just a few of the entertaining after-dinner speakers we work with if you are planning a dinner function this year.

Perry McCarthy is an entertaining after-dinner speaker and an inspiring motivational speaker, best known to many as the original Stig from the BBC show Top Gear. Perry is an ex-Formula one driver who drove for Andrea Moda in 1992 and tested for both Williams and Benetton in the 1990s before moving into sportscars, including driving in the 24 Hours of Le Mans five times between 1996 and 2003. The then went on to be the secret racing driver from BBC Top Gear ‘The Stig.’

Perry’s speeches include stories about his role as the original Stig (from Top Gear), his rise to Formula One, some misadventures at 200 miles per hour, and stories on some F1 greats including Michael Schumacher, Lewis Hamilton, Kimi Raikkonen, Nigel Mansell, Murray Walker the world of International Motor Racing.

Gerald Ratner is a British businessman and retail speaker and after-dinner speaker, best known for his gaffe that pushed his family jewelry business to near bankruptcy. Gerald Ratner was the Chief Executive of Ratners Group, the world’s largest jewelry retail company when he was asked to speak at an event at the Albert Hall for the Institute of Directors in 1991. During his speech, he described one of his products as total crap.

As an after-dinner speaker Gerald entertains his audiences with tales of his wild, up and down roller coaster ride in business, in his inimitable humorous and erudite style, and what lessons he has learned and what not to do in business and how to bounce back.

Cally Beaton is a media executive, entrepreneur, performer, and keynote speaker on leadership culture and change. At the start of her career, Cally Beaton headed an independent television production company that was bought by ITV. She joined the board of the UK’s main commercial broadcaster as both the youngest and the only woman member (and for a while sat alongside David Cameron). She left ITV to start a creative consultancy and production company as well as joining Viacom as Senior Vice President of International Sales.

It was working on Comedy Central that saw Cally develop her other life as a standup comedian. Despite joining the circuit after already establishing an impressive corporate career, the move has seen her perform at clubs around the country, front her own show at the Edinburgh Fringe, and appear as a guest on QI and on Radio 4’s The Museum of Curiosity.

Kev Orkian is without question one of the UK’s finest Entertainers, Motivational Speakers, and Internationally acclaimed Award-Winning Comedy Pianist. A highly skilled Pianist, Singer & Actor, Kev has honed his art to perfection over many years from his days as a classical concert pianist to performing Stand-up and supporting some of the biggest names in British comedy.

Blending his off-beat humour with sensational performances on the piano he has been dubbed one of the world’s finest comedy pianists. Supporting some of the UK’s biggest comedy names, Kev has shared critical acclaim and standing ovations with his one-man show.

Bennett Arron is an award-winning writer, stand-up comedian, and speaker on Identity Theft, Fraud, and GDPR. Several years ago, Bennett was in serious debt. He owed thousands of pounds to phone companies, banks, and department stores. Only it wasn’t him. Bennett was the first major victim of Identity Theft in the UK. The crime left him penniless and homeless.

Years later, Bennett wrote, directed, and presented the Channel 4 Documentary How To Steal An Identity in which he stole the identity of the Home Secretary. As well as speaking on his experience, Bennett also delivers after dinner stand up sets for corporate events

Garry Richardson has worked for the BBC for 45 years!Garry can be heard most mornings on BBC Radio 4’s prestigious “Today” programme Britain’s most influential breakfast programme. He’s been appearing on the programme now for 38 years and is the longest-serving member of the team. He can be heard most mornings broadcasting from the BBC studios and rubbing shoulders with the country’s decision-makers.

President Bill Clinton, His Royal Highness Prince Harry, Samuel L Jackson, and World Number 1 Tennis star Serena Williams have all been on BBC programmes with Garry. After 45 years at the BBC Garry Richardson takes you behind the scenes with a fund of hilarious stories from his broadcasting life.

Kevin Keegan OBE is an inspirational speaker and former England, Liverpool Footballer, and Former Manager of England. A career that included time at Liverpool, Hamburg, Southampton, and Newcastle as well as the national side, Kevin captained England for six years until his international retirement after the 1982 World Cup.

As a manager, Kevin Keegan was in charge of Newcastle, Fulham, Manchester City, and England. Kevin is very an entertaining and popular after-dinner speaker

Toyah Willcox is a multi-talented singer and actress and inspirational speaker, who has continuously re-invented herself, during her 40-year career. Charismatic, outspoken she is one of Britain’s iconic household names – an award-winning rock legend as well as a much-loved stage/screen actress and music composer. Toyah Willcox is a uniquely gifted performer.

She has amassed thirteen top 40 singles, recorded twenty-four albums, written two books, appeared in over forty stage plays, acted in fifteen feature films, and presented hundreds of television programmes. In her after dinner speech she talks about her career and there are an awful lot of stories to tell. From playing the donkey in the school nativity to wearing a rubber dress on the set of Das Boat in Germany.

If you are looking for an after-dinner speaker for your event please do drop us an email at enquiries@scampspeakers.co.uk and we would be delighted to help.