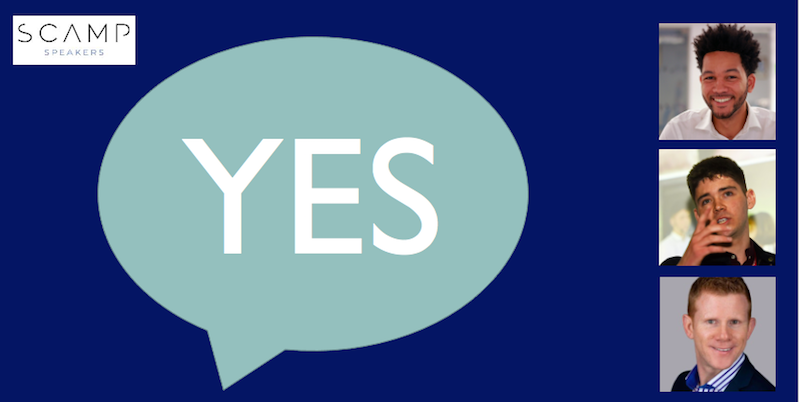 “If you say yes to opportunities, amazing things can happen.” – Anthony Bennett

This is just one of the messages that Inspirational Speaker Anthony Bennett speaks about in his talks. In this time when many of us might be feeling anxious or worried about the future, Anthony is one of several speakers we work with that talk on, and encourages people, to say YES to what opportunities come your way and not to shy away, as wonderful things can happen. It is time to embrace those opportunities.

If you looking for a speaker to help inspire your team to say YES, please see some more details below on Anthony, and a few other speakers, that could be of interest.

In 2006, after returning from a trip to Disneyland Paris Anthony fell extremely ill and was left fighting for his life. After what many would consider being a miracle, Anthony was given only a 10% chance of survival but made a full recovery, and by saying YES to the opportunities that came his way he ended up playing a major role in winning a £7.5m Charity Partnership between Whitbread PLC and Great Ormond Street Hospital Children’s Charity, and spent 4 years traveling the UK and Inspiring teams to get involved in raising the much-needed funds for the children’s charity.

Harry Daymond is an inspirational award-winning young entrepreneur, business speaker, and founder of Kart Kompany Ltd & the Cocktail Connoisseurs. Winner of the Young Start-Up Talent Award, selected in the Transferwise 20 Under 20 and Ernst and Young Founders 30, Harry launched his first business Kart Kompany Ltd when he was just 15 years old.

The company started over a school summer holiday when Harry decided to build a fully collapsible vintage cart with his Grandfather in his garage, and then started serving sweets off it for weddings and events. Throughout his GCSE and A-level years, he grew the business, joining networking groups and approaching venues in his free time. After college, he decided to not go to University, and instead pursued a digital marketing apprenticeship, allowing him to continue to run his business in parallel.

18 months later having worked a 9 am to 5.30 pm job, using his holiday, lunch breaks, and evenings to run his business, the Kart Kompany now operates multiple services, with the newest being the Cocktail Cart.

Harry Daymond has been asked to share his story, encouraging people to follow their passion, define success for themselves, take every opportunity presented to them, and never giving up in pursuit of their dream.

His speaking topics include

Richard McCann is an inspirational, powerful, and moving motivational speaker, and founder of the ICan Academy designed to help ignite people’s mindsets and allow them to grow, develop and become more successful

Richard believes that the most successful people in business are those who embrace change and adapt, identifying the opportunities that arise and grabbing them with both hands.

As a highly versatile and experienced speaker, Richard can adapt his keynotes and other presentations to meet the objectives of his clients but coves subjects such as –

If you want your team to say YES! please do drop us a line on enquiries@scampspeakers.co.uk or call on 020 8854 7247 to learn more about the speakers