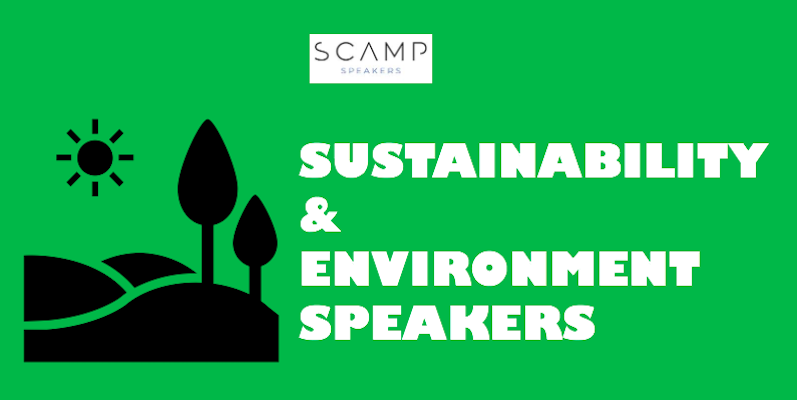 COP26 took place in November 2021 and brought together parties to accelerate action towards the goals of the Paris Agreement and the UN Framework Convention on Climate Change.

Trewin Restorick is the founding CEO of Hubbub, a charity that makes environmental issues fun. Launching creative campaigns and collaborating with companies of all sizes, Hubbub is a visionary charity that works to bring issues of climate change, carbon footprints, and global warming into the public eye in a fun and light-hearted way. By focusing on people’s passions like food, sport, and fashion, the charity aims to communicate environmental issues through a fresh and exciting perspective.

Lucy Houliston is a Zoologist, digital content producer, National Geographic Young Explorer, and speaker with a passion for weird wildlife and conservation. An experienced speaker, Lucy Houliston has delivered school talks internationally; presented at numerous conferences and festivals; and moderated and hosted live and digital events for the likes of Reserva: The Youth Land Trust, the British Ecological Society, and National Geographic.

Lucy loves using her digital and storytelling skills as tools to generate support for conservation efforts, this aspect of her work has taken everywhere from rugged Scottish islands to a Panamanian sloth sanctuary and one of the remotest corners of the Ecuadorian cloud forest. In addition to producing written content for nature-focused magazines and blogs, Lucy has directed and co-produced fundraising events with the RSPB and Rainforest Trust; advocated for sloth conservation and welfare in her role as a digital content producer for the Sloth Appreciation Society; and worked as a live producer and editor for Skomer LIVE, a digital natural history series created in partnership with the Wildlife Trust of South and West Wales.

Laurence Kemball-Cook is the award-winning founder and CEO of Pavegen Systems, an innovative clean technology company, and keynote speaker on renewable energies and disruptive technologies. Pavegen is a flooring technology that instantly converts kinetic energy from footsteps into renewable off-grid energy.

This technology has been used across the world and installed in over 150 projects in more than 30 countries. Laurence has partnered with figures such as solar entrepreneur and artist Akon, football legend Pele and will.i.am to promote his clean-tech vision. He has also worked with some of the world’s largest companies including Shell, Adidas, Heathrow, and Europe’s largest shopping centre, Westfield.

Laurence is a thought leader and speaker at various technology and entrepreneurship events worldwide; his TEDxBerlin talk was featured amongst TED’s top talks on envisioning the cities of the future and changing attitudes to fossil fuels. Additionally, Laurence was the youngest CEO of a delegation of leading British companies, joining the Prime Minister, David Cameron, on a state visit to China.

Paul Johnson is Director of the Institute for Fiscal Studies, the UK’s leading economic research institute, since January 2011 and in demand as a speaker on subjects such as the economy, public finances, tax, and climate change. Under his leadership, the IFS became the first organisation to win the Prospect ‘Think Tank of the Year’ award two years in a row in 2014 and 2015 and has won the “economic and financial” think tank of the year four years in succession. The IFS hosts two major research centres and combines its leading role in public policy with world-leading academic economic research.

Paul is also a visiting professor in the Economics Department at UCL and a columnist for The Times. He is a board member of the Climate Change Committee, of the Office of Tax Simplification, and of the Banking Standards Board and is currently a trustee of the Kings Fund. He has led reviews of pension policy for government and of price statistics for the UK Statistics Authority.

Paul speaks on Climate Change, and what we can all do to try and prevent it

Sir Tim Smit is the founder of the Eden Project and Executive Vice-Chair of Eden Project Ltd and a passionate speaker on the environment, conservation, and sustainability. The Eden Project began as a dream in 1995 and opened its doors to the public in 2000 since when more than 19 million people have come to see what was once a sterile pit turned into a cradle of life containing world-class horticulture and startling architecture symbolic of human endeavour. The project has contributed over £1.9 billion into the Cornish economy.

Sir Tim Smit is a passionate speaker and entertaining keynote speaker. His talks cover subjects such as –

These are just a few of the speakers we work with who speak on the environment. For more information on any of them or any enquiries please contact us on enquiries@scampspeakers.co.uk