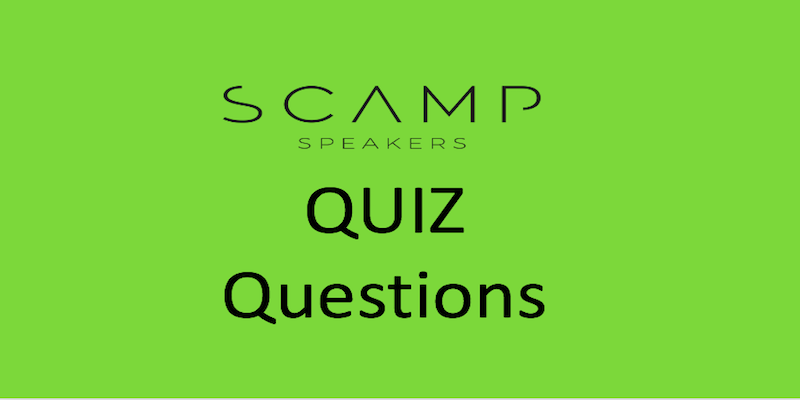 Like many of you, we at Scamp Speakers have taken part in a number of online quizzes with families and friends over the last few months.

Just for a bit of fun, we thought we would just share with you some of the questions from the last quiz we took part in.

The video link is 10 questions where you have to guess what film the three characters appear in. The answers are at the end of the slides. For the general questions below click on the link at the end to reveal the answers.

QUESTION1
Which planet in the solar system is the smallest?

QUESTION2
Mark Labbett, Anne Hegerty and Shaun Wallace are better known as what on TV?

QUESTION3
Between 1995 and 2019 only 3 football clubs outside the big 6 have won the FA CUP (The Big Six being – Liverpool, Man Utd, Arsenal, Man city, Chelsea, Tottenham). Can you name them? (3 points awarded)

QUESTION4
Which town is the furthest Easternmost point in United Kingdom?

QUESTION5
J.K Rowling is the author of the Harry Potter series of books. But what does the J stand for in her name?

QUESTION6
Tabby McTat, Room on the Broom, the Highway Rat and the Gruffalo are children’s books by which author?

QUESTION7
Which explorer is widely acknowledged to have discovered Australia in 1770?

QUESTION8
What is the name of the mountain that has the sculptures of 4 American presidents carved into them?

QUESTION9
Which track from the Saturday Night Fever Album performed by the Bee Gees was the only one to make number 1 in the UK?

QUESTION10
In what year did Woolworths go into Administration?

QUESTION11
What were the first six original Mr Men Books that were published? (6 points awarded)

QUESTION12
What is the connection between Sir David Frost, Tony Blair and Brian Clough?

QUESTION13
What was the name of the third astronaut on Apollo 11 that accompanied Buzz Aldrin and Neil Armstrong when the first landed on the moon?

QUESTION14
How many former Prime Ministers currently sit in the House of Lords?

QUESTION16
Which fast food restaurant chain has overtaken McDonalds with the most outlets/restaurants in the world?

QUESTION18
In Athletics what is the connection between the following events – the Decathlon, 110metres hurdles and the 25km RaceWalk?

QUESTION19
In Reservoir Dogs, the six men hired to carry out the robbery were given alternative names and each were given a colour. So you had Mr ……etc ? What were the six colours? (6points available)

QUESTION20
What is the first number when written out (e.g. TWO) that has all its letters in alphabetical order?

QUESTION21
What is the name of the two children of Matthew Fisher, MD of Scamp Speakers?

We hope you enjoyed this and if you know that any of the answers we have given are wrong – let us know and we shall fire our quizmaster.

Best Wishes to you all!