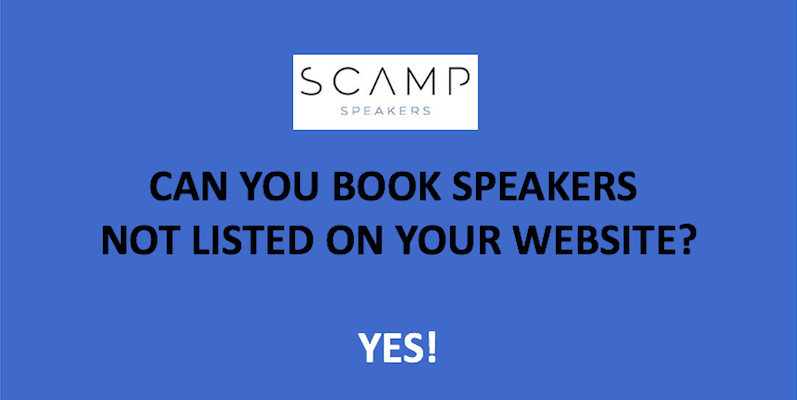 We often get asked can we book someone who is not on our website and the answer to this is YES. Whilst we have about 300 speakers on our website and add new names relatively frequently, we also have an extensive database of further contacts that allow us to book a wider range of speakers.

Below are just a few examples of speakers we have worked with who are not on our website but have recently done speaking events for us.

Philip Collins is the Writer in Chief for the Draft Contributing Editor for the New Statesman and Columnist for the Evening Standard. Philip served as Tony Blair’s Chief Speech Writer for five years, leaving Number 10 on the same day as the former PM and penning his last speech in office. Philip went on to become The Times former Chief Leader Writer for almost a decade, before becoming a columnist for them, leaving for the New Statesman in 2020. As well as a view on leadership and strategy, Phil looks at how to communicate your intentions, set the agenda, and persuade others of your argument with the right balance of emotion and reason, depending on your audience

Ollie Ollerton’s military career began at the age of 18 when he joined the Royal Marine Commando and toured operationally in Northern Ireland & Operation Desert Storm in Iraq.Upon his return to the UK Ollie was recommended for SAS Special Forces Selection after five years of service with Commandos. Upon completion of the grueling 6 months selection process, Ollie was one of 5 candidates to pass selection from an initial 250 that started the course.

On completion of SAS selection Ollie then joined the Special Boat Service, (SBS) to undergo further training to qualify as a Special Forces Combat Frogman. Ollie is a cornerstone of the team that brought the Special Forces into the public eye with the Channel Four series SAS: Who Dares Wins, and CEO of BREAK-POINT, an organisation for both public and corporate that focuses on changing people’s limiting beliefs and performance.

David Olusoga is a British-Nigerian historian, broadcaster, and filmmaker. His most recent TV series include Empire (BBC 2), Black and British: A Forgotten History (BBC 2), The World’s War (BBC 2), 3 seasons of A House Through Time (BBC 2), and the BAFTA-winning Britain’s Forgotten Slave Owners (BBC 2).

David is also the author of Black & British: A Forgotten History which was awarded both the Longman-History Today Trustees Award and the PEN Hessell-Tiltman Prize. His other books include The World’s War, which won First World War Book of the Year in 2015, The Kaiser’s Holocaust: Germany’s Forgotten Genocide and the Colonial Roots of Nazism and Civilizations: Encounters and the Cult of Progress. David was also a contributor to the Oxford Companion to Black British History and writes for The Guardian and is a columnist for The Observer and BBC History Magazine.

Simon Reeve is an author and TV presenter, and one of the world’s most adventurous travelers. As the presenter of multiple BBC television series including Indian Ocean, Australia, Tropic of Cancer, Equator, and Tropic of Capricorn, he has traveled extensively in more than 110 countries, across jungles, deserts, mountains, and oceans, and to some of the most beautiful, dangerous and remote regions of the world.

Reeve is also a New York Times bestselling author who has written or contributed to numerous books on international terrorism, modern history, and his adventures, including The New Jackals (1998), the first book in the world on Osama bin Laden and al Qaeda, One Day in September (2000) and Tropic of Capricorn (2007). He has received a One World Broadcasting Trust Award for “an outstanding contribution to greater world understanding” and the prestigious 2012 Ness Award from the Royal Geographical Society.

Sathnam Sanghera is an award-winning journalist, acclaimed author, and broadcaster. His first television documentary, The Massacre that Shook the Empire, made for Channel 4, examined one of the darkest days in British and Indian history, The Amritsar Massacre of 1919.

Saira Khan is an adept and experienced motivational and keynote speaker. As a renowned sales and motivational expert, Saira has taken the UK by storm since her appearance on The Apprentice. She has gone on to run a successful mother and baby products business, Miamoo, and a natural skin products business Fruits of Kashmir. She is also a television presenter, having hosted The Martin Lewis Money Show, Guess The House, and been a panelist on Loose Women.Saira has an MA and a BA Hons

As always if we can help with any of your enquiries please email us on enquiries@scampspeakers.co.uk